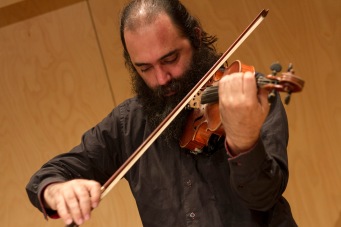 Born in 1978 in Montornès del Vallès, Jaime begins his musical studies at the age of five in Granollers. In 2003 he finished his studies and obtains the grade in Violin and Chamber Music at Liceu’s Conservatory. In 1999 enters the CNR from Perpignan and begins studies of jazz and improvisation with Alexander Augé, sometime later, he had the opportunity of being guided by prestigious musicians, such as Didier Lockwood, Jean Luc Ponty, Mark O’Connor, Gilles Apap, Christian Howes and Darol Anger. During the academic year of 2008-2009 assists a professional cours of CMDL.

He collaborates with various Catalonian symphonic and chamber orchestras.

In 2004 he begins a doctoral thesis about violinists in Barcelona’s first half of the 20th century, and co-found the Associació Manén.

From 1997 he works within the education field in different music schools, and nowadays  he is teaching Violin and Jazz at ESEM «Taller de Músics».